In from the cold: Cape Verde Airlines, Africa’s Icelandair

In from the cold: Cape Verde Airlines, Africa’s Icelandair

Cape Verde Airlines has always been a small and financially poor-performing airline with inconsistent capacity development, vividly highlighted below. 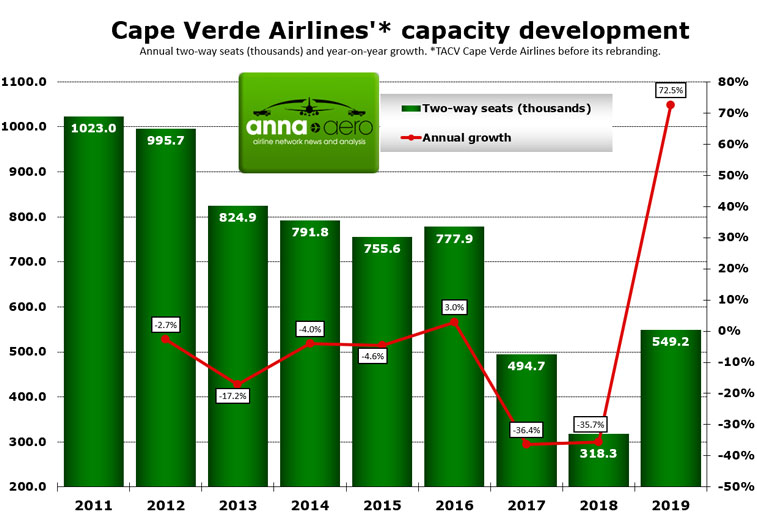 Cape Verde Airlines’ capacity has been highly inconsistent, but it is expected to grow in a sustainable way with new ownership and strategy. Source: OAG Schedules Analyser.

Cape Verde Airlines sits in narrow-body range of Europe, North America, South America and (mainland) Africa. Within 4,000 miles of Sal, the airline’s hub, are all relevant areas of Europe and large amounts of South America,  Africa and Eastern USA. Its existing and announced routes are all in an eight-hour radius. Some, like Fortaleza, have a flying time of about 3.5 hours. 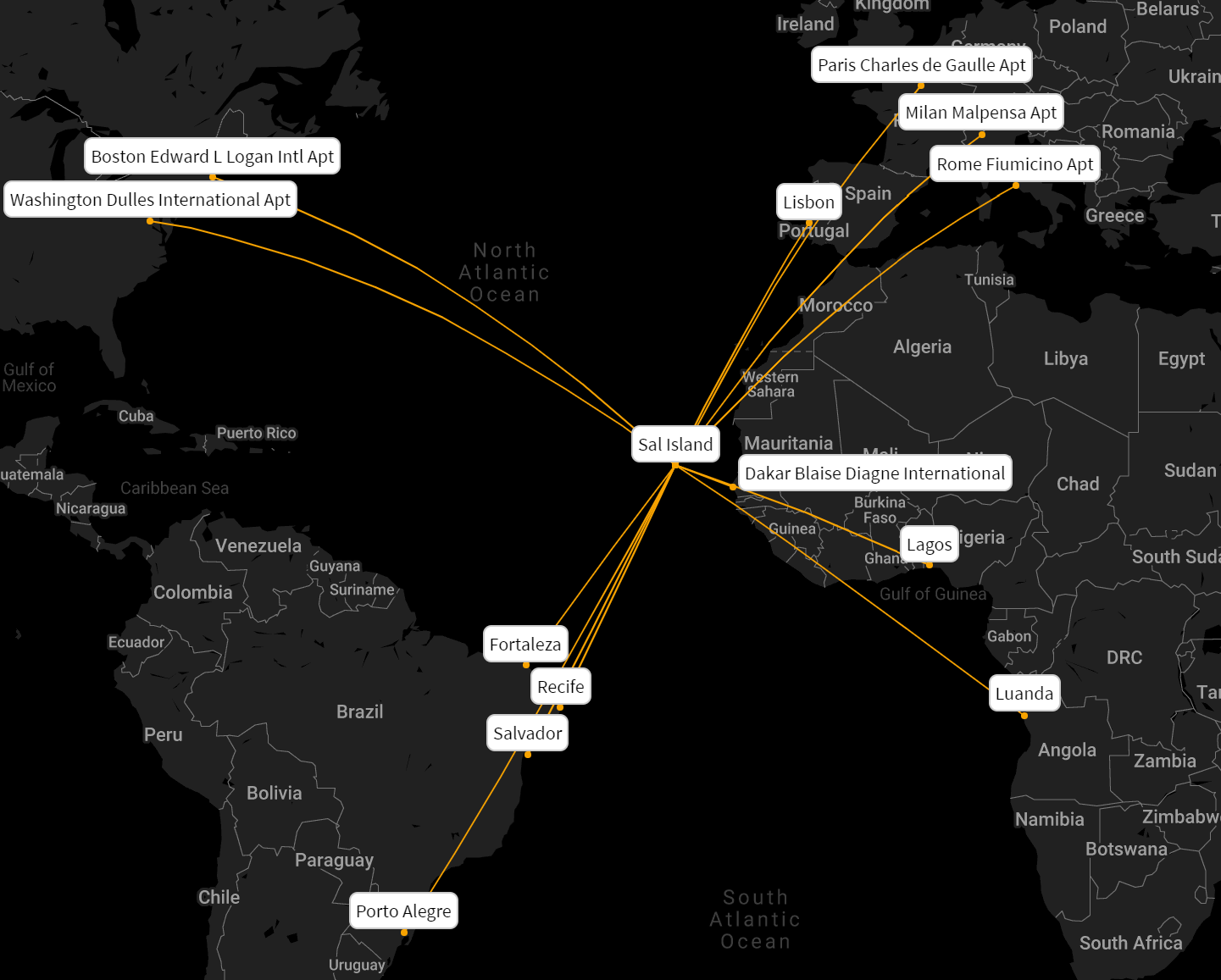 All of Cape Verde Airlines’ destinations are within an eight-hour radius of Sal. Lagos, Luanda and Washington all start in W19. Boston does as well, but was previously served from Praia, a neighbouring island. Note: for clarity reasons, only international destinations are shown on this map. Source: OAG Mapper.

Connections and tourism are crucial for Cape Verde Airlines in its quest to become ‘Africa’s Icelandair’. Bjarnason said: “Our goal is to keep growing in a sustainable way, emulating Icelandair’s successful business model… we now have a new mission, which is to connect these four continents.”

Cape Verde expects three million tourists by 2030, up from 760,000 in 2018. Key countries for tourism are the UK, France, Netherlands and Germany.

Cape Verde, a former Portuguese colony, has strong connections with Portugal, including diaspora. In addition, it plays an important role in linking Portuguese-speaking countries. It serves Lisbon daily and links it to Brazil and, from later this year, Angola. There are 100,000+ Cape Verdean diaspora in the USA, mainly in New England, which accounts for its Boston service.

Some routes are virtually on the great circle, such as:

With highly coordinated waves with one-to-two hours on the ground, Cape Verde Airlines is focusing on quick and easy connections. 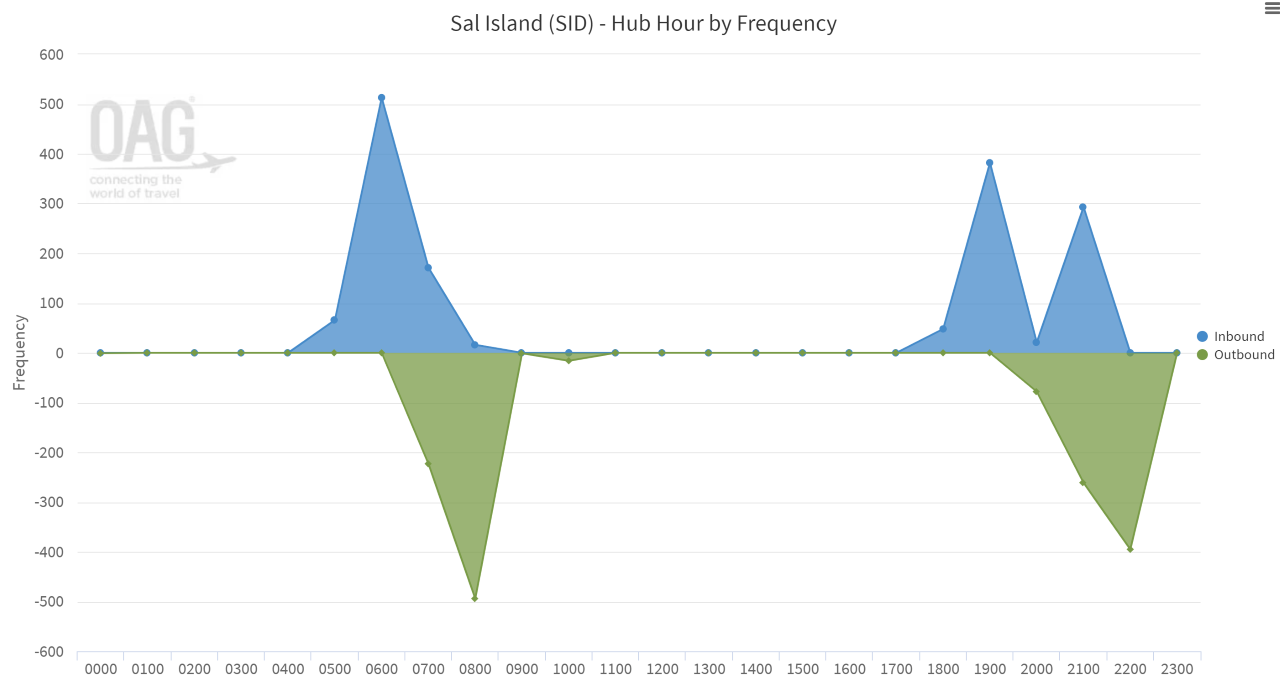 Cape Verde Airlines has exceptionally clear waves. Early morning arrivals come from Africa and South America, with flights to Europe and the USA then departing. And vice-versa in the evening. Its services to the USA remain in the USA overnight, with the same aircraft and crew returning the next day.

Arrivals from African and South American cities arrive ~0630-0730 and depart soon after to Europe and the USA. These arrive back in the mid-evening – the next day for the USA – to connect onwards. For example:

Clearly, new routes will need to fit into the above pattern for connectivity. Based only on passenger traffic to its served destinations and removing those flying non-stop, the following are possibilities:

Despite the obviousness of London, the author’s bet is on Porto: all except Luanda are unserved, there’s strong demand, it’s in Portugal, it is the closest, there is minimal mileage deviation to most destinations, and aside from TAP over Lisbon, there’s almost no choice to Brazil, in particular, without detouring.